Posted on July 4, 2018 by Wichita Genealogist

I haven’t seen many updates announced for DNA.Land by other bloggers or by  DNA.Land as they often quietly do things. When it first started, you could only upload one test/account so I have several DNA.Land accounts and one day I will merge them all into one account.

For those not familiar with DNA.Land, it’s not a testing company. They do accept raw data from other companies. You can read their FAQs at https://dna.land/faq. From their website, it appears they only accept raw data uploads from 23andMe, AncestryDNA, MyHeritageDNA, or FamilyTreeDNA. I am curious if they will add other companies down the road. For example, Living DNA is a company that has potential and hopefully DNA.Land will add them to the list at some point.

Here’s a screenshot of my ethnicity results (see below for those who can’t see the screenshot): 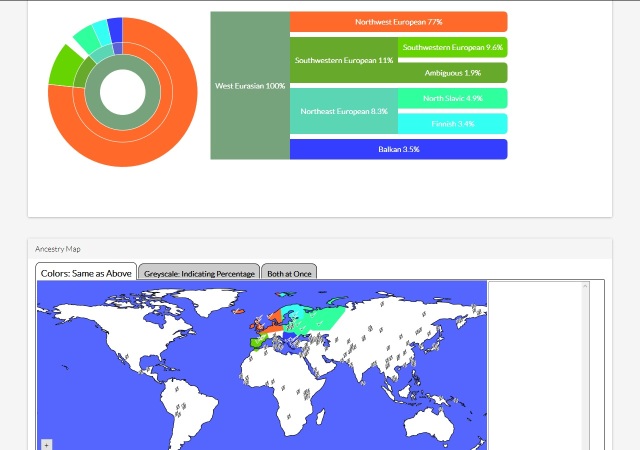 DNA.Land also has matching. It will show up to 50 relative matches. Some of these matches are from other companies so I have a few matches who don’t show up with my other results as I haven’t tested with those companies. They also have Find Relative of Relatives section and many of those aren’t matches with the companies I have tested.

Another section includes Trait Reports. You have to accept the following conditions before they will let you see your results.

Would you like to consent and see your genetic predictions?

I understand that the information provided in my trait prediction reports is for educational and research purposes only. *
I am well aware that these reports are not considered a medical test by any means and are not intended to diagnose or treat any disease. *
I realize that trait predictions usually report only a small fraction of the genetic predisposition and are error prone. The reports ignore environmental, dietary, microbial, medical history and lifestyle factors, any or all of which may well affect my true risk for any trait or disease. *

If you consent, you get to the next screen:

Many studies have been conducted to discover associations between single nucleotide polymorphisms (SNPs), which are areas of the genome that vary between individuals, and biological traits believed to have a genetic component. This is a list of traits predicted using your genome. You can click on a specific trait for further details.

Each of these pages contains a survey where you can provide direct feedback on the accuracy of these predictions. The survey is presented before the prediction results, so as not to have an effect on your responses.

I hadn’t completed any of the surveys when I copy/pasted the above as I didn’t realize I needed to which is why you aren’t seeing anything above.  I went through all of the above surveys and have completed all but the Eye color one as it requires me to figure which eye pattern best matches and I need better lighting.

When you upload your raw data, it may take a few days to generate the above reports as it imputes your raw data. At some point, it will provide you with raw data, Imported VCF, Imputed VCF, and Imputed TBI